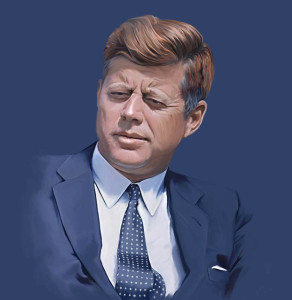 Many know that President John F. Kennedy suffered from low back pain. But, Kennedy’s medical history was far more serious and complex.  In fact, his health was a closely guarded secret. It wasn’t until the release of his medical records in 2002 that the public became aware of his lifelong struggle with pain. The first in a two-part show features Robert Dallek, noted historian, Pulitzer Prize finalist, Bancroft Prize winner, and author of Camelot’s Court: Inside the Kennedy White House. He’ll give us an intimate view of Kennedy’s personal life, health, and legacy. [LISTEN TO PART II]

Featuring Dr. Forrest Tennant Elvis Presley is the “King of Rock and Roll” and one of the most celebrated musicians of the 20th century. His death...Read More

Featuring Dr. Forest Tennant Elvis Presley is the “King of Rock and Roll” and one of the most celebrated musicians of the 20th century. His death is...Read More

Bachelorette alum J.P. Rosenbaum has been diagnosed with Guillain-Barré syndrome. The 42-year-o[...]

Dr. Paul Christo
"According to the National Headache Foundation, the body often produces less natural painkillers, like endorphins and enkephalins, between the hours of 4 a.m. and 8 a.m." http://bit.ly/2Nw5odU

Why Do I Wake Up With a Headache?
In all fairness, people are naturally vulnerable to headaches during the early hours of the morning.
popsugar.com
18    View on Facebook

Gwyneth Paltrow's Go-to Osteopath Reveals How You Can Be Your Own Pain Investigator
Celeb osteopath Vicky Vlachonis shares her tips to combat chronic pain.
thriveglobal.com
17    View on Facebook

Dr. Paul Christo
"It’s important for young people with disabilities to see themselves represented in all facets of life." http://bit.ly/2RldB5N via The Mighty

Need a New Tie? This Disabled Entrepreneur Has You Covered.
He was inspired by John's Crazy Socks!
themighty.com
21    View on Facebook

Dr. Paul Christo
I want to hear more about your experiences with #ChronicPain or #ChronicIllness. If you're interested in sharing your story, and potentially being featured on #AchesAndGains, please submit your story here: http://bit.ly/2Eii8A8

Share Your Story - Dr. Paul Christo MD
We all have a story, and we want to know yours! Please share with us your journey to overcoming your pain - the struggles, the support and ultimately the successes.
paulchristomd.com
33    View on Facebook

Dr. Paul Christo
Eating habits tend to be a large part of #NewYearsResolutions. Here's some "food for thought" when looking at diet and #ChronicPain: http://bit.ly/37ZF57u

Food for Thought: Diet Plays Significant Role in Pain Relief - Dr. Paul Christo MD
Integrating foods into your diet that don’t stimulate the inflammatory chemicals in your body can fight inflammation, significantly reducing pain. Weight and nutrition may be a popular topic in the summer months, but most people could benefit from keeping these subjects top-of-mind all year round....
paulchristomd.com
26    View on Facebook

Dr. Paul Christo
Have you regularly tried this pose for chronic #BackPain? Are there others you practice too? http://bit.ly/2TmmOgA

The Simplest and Most Effective Way to Relieve Back Pain, According to a Yoga Teacher
This simple yoga pose, called legs-up-the-wall, helps stretch the hamstrings and back of the legs, while relieving painful pressure in the hips and back.
popsugar.com
22    View on Facebook

If you're looking to exercise more in the #NewYear, but are having a hard time if you're in cold weather, here are some tips: https://t.co/WUKLQF3McF
View on Twitter
0
0

The body often produces less natural painkillers, like endorphins and enkephalins, between the hours of 4 a.m. and 8 a.m. https://t.co/fNCQgzKelA via @POPSUGAR
View on Twitter
0
0

Celebrity osteopath discuses how we can become pain investigators, and connect with our bodies to combat #ChronicPain: https://t.co/gWgMndknU7 via @thrive
View on Twitter
0
0

#MentalHealth is so important, and #college can be a critical time of challenge to maintain it. Consider sharing these strategies for helping manage #stress while at school: https://t.co/XtL2ex1AqH
View on Twitter
0
0

In a new report, @cvspharmacy offers a strategy that both health plans and plan sponsors can adopt to get out ahead of the costs associated with these #GeneTherapy treatments: https://t.co/EV5xcocDuK
View on Twitter
0
0

I want to hear more about you and your experience with #ChronicPain or #ChronicIllness. Sharing your story could help so many others: https://t.co/CT0TwyUMNt #Spoonies
View on Twitter
0
0
Follow @DrPaulChristo