Dr. Maya Angelou was featured on Aches and Gains shortly before her passing. 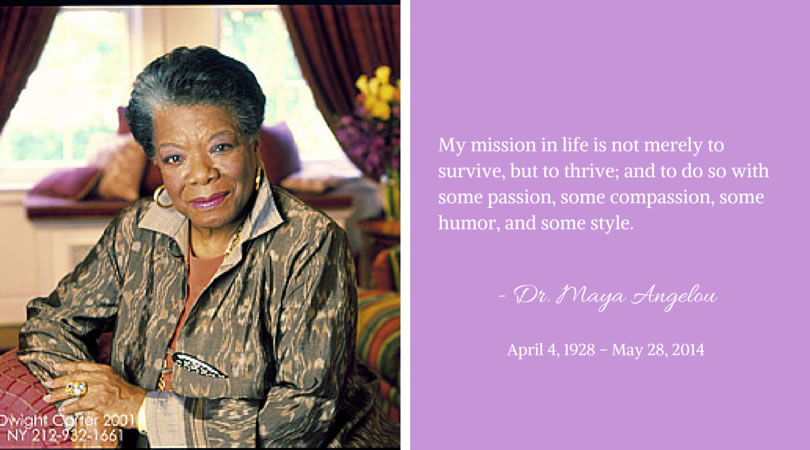 Dr. Maya Angelou is known as the “American Renaissance Woman.”

After a traumatic event, Dr. Maya Angelou spent nearly six years of her youth as a mute in which she suffered great emotional pain. Despite her era of silence, she went on to become a voice for many generations and cultures as an author, poet, civil rights activist, actress, and producer, among countless other endeavors.

When she passed May 28, 2014, the “American renaissance woman” left a legacy of inspiration and grace, touching the lives of millions with her work. I had the awesome opportunity of interviewing Dr. Angelou on Aches and Gains shortly before her passing.

Dr. Angelou talked about her use of oxygen to manage her COPD (Chronic Obstructive Pulmonary Disease) due to a collapsed right lung and lesions on her left lung. She had developed arthritis, which was a constant source of pain for Dr. Angelou as her joints became stiffer with age.

Our candid discussion circled back to the power we all hold within ourselves to overcome obstacles and change our attitudes. Dr. Angelou acknowledged the toll that physical and emotional pain can take on your overall well-being.

Like certain races of people, those in chronic pain feel marginalized and isolated. I had asked Dr. Angelou what pain sufferers can do to reconnect with others, to which she responded that if you can admit that you don’t deserve the pain, it’s a great start.

“We may encounter many defeats but we must not be defeated.” – Maya Angelou

Dr. Angelou shared her unique way of fighting pain and why staying active in body and spirit can be healing. If the pain bothered her, she said she would take a pain pill, or take a walk and look at the stars. Dr. Angelou said music and her art collection were other sources of comfort in hard times.

When obstacles like pain, depression and fear get in the way of someone living a full life, it’s hard to see beyond that pain and work toward a better life. Dr. Angelou said the most important step someone can take when they feel overwhelmed is admit how far they have already come.

Dr. Angelou noted that events occur which will change you, but you can decide whether you will or will not let them reduce your spirit and drive.

In her poem, “On Aging,” Dr. Angelou addressed the changes people experience as they age. She told me surviving is not enough, and that those in pain and people getting older must thrive, thrive with some passion, compassion, humor and style. She was able to turn what some may see as a negative and change her attitude in order to acknowledge the gifts she could continue to share with others.

“I’m the same person I was back then, A little less hair, a little less chin, a lot less lungs, much less wind. But ain’t I lucky I can still breathe in…”

This site uses Akismet to reduce spam. Learn how your comment data is processed.