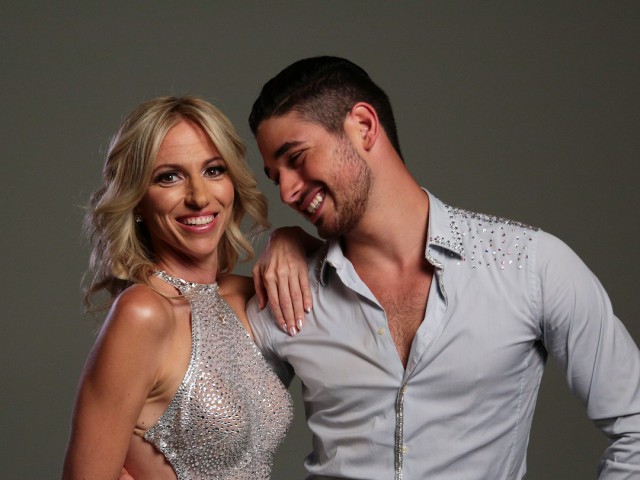 *Article originally published on The Mighty.

Having chronic health issues can leave you feeling down about your body and, for many people, like your life is on “pause” while you fight your illness. Debbie Gibson is hoping “Dancing With the Stars” will help her get her her “joy back” after years of struggling with Lyme disease.

The singer told Entertainment Tonight on Wednesday that after years of health issues due to Lyme disease, she hasn’t been “friends” with her body and she joined “Dancing With the Stars” to help her get back to the life she had before.

She said the show has already given her daily accomplishments to be proud of, she hopes the show will help pull her out of feeling “stuck” and “sidelined” in her life due to her health issues.

“I’m ready to get unstuck and I think this is the way. It’s the way to do it,” she said.

In 2014, Gibson revealed she had been diagnosed with Lyme disease the previous year after people criticized her thin appearance. In a blog post on her website, she explained that she felt flu-like symptoms, cognitive challenges, pain and food sensitivities for months as she went from doctor to doctor trying to get a diagnosis. She finally discovered she had Lyme disease after a GI doctor ordered her a test.

“By this point, my cognitive thinking had been affected… my sense of direction, sleep, moods, stamina, muscles and joints. And, I had this sunken in look and dark circles under my eyes,” Gibson wrote. “All the times you saw me on Vine, Twitter, Facebook, Instagram or YouTube laughing and singing, I used concealer to cover that up and pulled from my reserves to bring you my best.”

Later that year, Gibson revealed that she was feeling better after being treated by a Lyme-literate doctor and taking antibiotics.

“I’m taking things day by day,” she told People. “I get into trouble when I look too far ahead and worry about the future. I’m now grateful for each day. This whole experience has taught me a ton of life lessons.”

“Dancing With the Stars” airs on Mondays on ABC at 8/7c.

Recovery from Pain and Addiction-Part I

Recovery from Pain and Addiction-Part II

NBC's Kate Snow, who has covered the opioid crisis for years, and Johns Hopkins University School of[...]

We Skype with Dr. Paul Christo, director of the Multidisciplinary Pain Fellowship Program at Johns H[...]

Dr. Paul Christo
In honor of #BreastCancerAwarenessMonth, we're revisiting my show on how to manage the pain related to breast reconstruction: http://bit.ly/2O0E1e3

The risk of having chronic chest pain after breast surgery (mastectomy and lumpectomy) for cancer is high at 20-30%. When a woman is confronted with breast cancer, many questions arise.
View on Facebook

Dr. Paul Christo
A good guideline for what to expect when meeting your pain specialist for the first time: https://bit.ly/3G19Af6 #ChronicPain #PainManagement
View on Facebook

Dr. Paul Christo
If you weren't able to listen to my #AchesAndGains show this weekend, but are interested in learning more about opioid addiction, Part 1 is available for listening here: http://bit.ly/2nWpZhv

Dr. Paul Christo
If you haven't been able to tune into #AchesAndGains yet, but are interested in learning about opioid addiction and the road to recovery, Part 2 of my show is airing now on SiriusXM Family Talk 131!

Dr. Paul Christo
Tune into#AchesAndGains now to hear my conversation around opioid addiction and what it's like to recover from it. Now airing on SiriusXM Family Talk 131!

Dr. Paul Christo ·
@DrPaulChristo
If you didn't have a chance to tune into #AchesAndGains this weekend, but are interested in hearing about recovery from opioid addiction, Part 1 of my show is now available for listening here: https://t.co/8JJFP63vrY
View on Twitter
0
0

Dr. Paul Christo ·
@DrPaulChristo
In honor of #BreastCancerAwarenessMonth, here are some helpful tips for managing pain related to #BreastCancer: https://t.co/NziU4E7RFh
View on Twitter
1
2

Dr. Paul Christo ·
@DrPaulChristo
Research on the connection between physical pain and economic cycles has been relatively limited to-date: https://t.co/rqdOF2cfhL via @Forbes #ChronicPain
View on Twitter
0
0

Dr. Paul Christo ·
@DrPaulChristo
64% of us have back problems after working from home: https://t.co/TlqHEAj5z9 via @glamourmag #BackPain
View on Twitter
0
0
Follow @DrPaulChristo