Could a Vaccine (and More) Fix the Fentanyl Crisis? 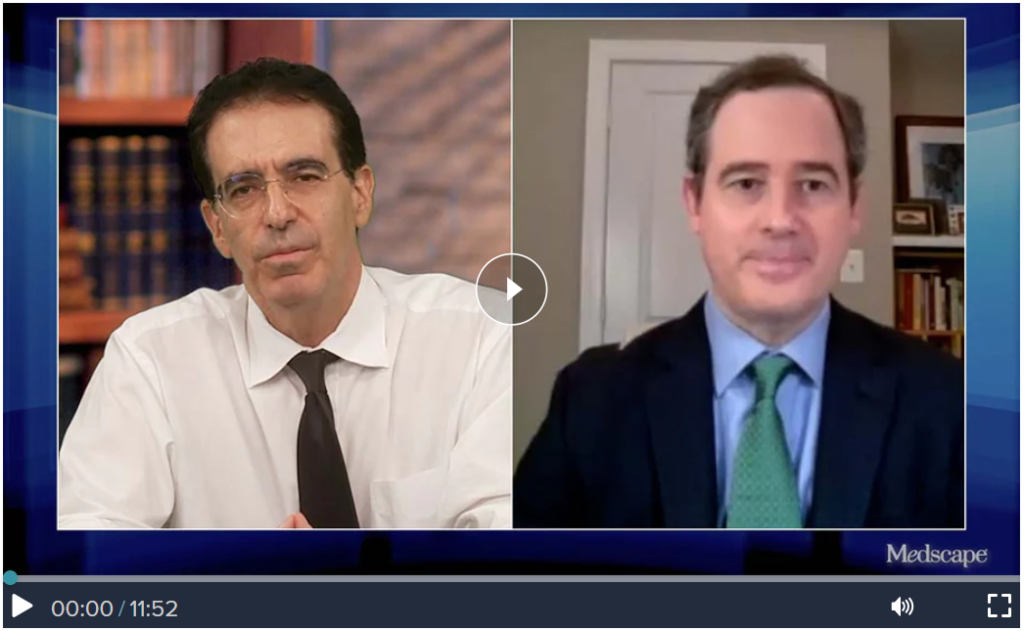 Robert Glatter, MD: Welcome. I’m Dr Robert Glatter, medical advisor for Medscape Emergency Medicine. Today we have Dr Paul Christo, a pain specialist in the Division of Pain Medicine at Johns Hopkins University School of Medicine in Baltimore, Maryland, and host of the national radio show Aches and Gains on SiriusXM Radio, joining us to discuss the ongoing and worsening fentanyl crisis in the US.

Paul J. Christo, MD, MBA: Thanks so much for having me.

Glatter: I want to begin with a sobering statistic regarding overdoses. There were over 107,000 overdose deaths in the US from 2020 to 2021, of which over two thirds involved the synthetic opiate fentanyl, based on recent data from the CDC.

Let’s start by having you explain how deadly fentanyl is in terms of its potency compared with morphine and heroin.

Christo: Fentanyl is considered a synthetic opioid. It’s not a naturally occurring opioid like morphine, for example, or codeine. We use this drug, fentanyl, often in the anesthesia well. We’ve used it for many years as an anesthetic for surgery very safely. In the chronic pain world, we’ve used it to help reduce chronic pain in the form of a patch.

What we’re seeing now, though, is something entirely different, which is the use of synthetic fentanyl as a mind- and mood-altering substance for those who don’t have pain, and essentially those who are buying this off the street. Fentanyl is about 80-100 times more potent than morphine, so you can put that in perspective in terms of its danger.

Glatter: Let me have you take us through an evolution of the opioid crisis from the 1990s, from long-acting opioid OxyContin, which was approved in 1995, to where we are now. There are different phases. If you could, educate our audience on how we got to where fentanyl is now the most common opiate involved in drug overdoses.

Christo: It really stems from the epidemic related to chronic pain. We have over 100 million people in the United States alone who suffer from chronic pain. Most chronic pain, sadly, is undertreated or untreated. In the ’90s, in the quest to reduce chronic pain to a better extent, we saw more and more literature and studies related to the use of opioids for noncancer pain (eg, for lower back pain).

There were many primary care doctors and pain specialists who started using opioids, probably for patients who didn’t really need it. I think it was done out of good conscience in the sense that they were trying to reduce pain. We have other methods of pain relief, but we needed more. At that time, in the ’90s, we had a greater use of opioids to treat noncancer pain.

Glatter: With fentanyl being the most common opiate we’re seeing, we’re having problems trying to save patients. We’re trying to use naloxone, but obviously in increasing amounts, and sometimes it’s not adequate and we have to intubate patients.

In terms of addressing this issue of supply, the fentanyl is coming from Mexico, China, and it’s manufactured here in the United States. How do we address this crisis? What are the steps that you would recommend we take?

Two, we need to better educate those who are using these mind- and mood-altering substances. We’re seeing more and more that it’s the young-adult population, those between the ages of 13 and 25, who are starting to use these substances, and they’re very dangerous.

Glatter: Are these teens seeking out heroin and it happens to be laced with fentanyl, or are they actually seeking pure fentanyl? Are they trying to buy the colorful pills that we know about? What’s your experience in terms of the population you’re treating and what you could tell us?

Christo: I think it’s both. We’re seeing young adults who are interested in the use of fentanyl as a mind- and mood-altering substance. We’re also seeing young and older adults use other drugs, like cocaine and heroin, that are laced with fentanyl, and they don’t know it. That’s exponentially more dangerous.

Glatter: People are unaware that there is fentanyl in what they’re using, and it is certainly leading to overdoses and deaths. I think that parents really need to be aware of this.

Christo: Yes, for sure. I think we need better educational methods in the schools to educate that population that we’re talking about (between the ages of 13 and 25). Let them know the dangers, because I don’t think they’re aware of the danger, and how potent fentanyl is in terms of its lethality, and that you don’t need very much to take in a form of a pill or to inhale or to inject intravenously to kill yourself. That is key — education at that level — and to let those who are going to use these substances (specifically, synthetic fentanyl) know that they should consider the use of fentanyl test strips.

The other harm reduction strategies would be the use of naloxone, known as Narcan. That’s a lifesaver. You just have to spritz it into the nostril. You don’t do it yourself if you’re using the substance, but you’ve got others who can do it for you. No question, that’s a lifesaver. We need to make sure that there’s greater availability of that throughout the entire country, and we’re seeing some of that in certain states. In certain states, you don’t need a prescription to get naloxone from the pharmacy.

Glatter: I think it’s so important that it should be widely available. Certainly, the COVID-19 pandemic exacerbated the number of overdoses we saw. Are overdoses coming down or are we still at a level that’s close to 2020?

Christo: Unfortunately, we’re still seeing the same level, if not seeing it escalate. Certainly, the pandemic, because of the economic cost associated with the pandemic — loss of employment, underemployment — as well as the emotional stress of the pandemic led many people to use substances on the street in order to cope. They’re coping mechanisms, and we really haven’t seen it abate quite yet.

Glatter: Do you have a message for the lawmakers on Capitol Hill as to what we can do regarding the illegal manufacturing and distribution, how we can really crack down? Are there other approaches that we could implement that might be more tangible?

Christo: Yes. Number one would be to support law enforcement. Number two would be to create and make available more overdose prevention centers. The first was in New York City. If you look at the data on overdose prevention centers, in Canada, for example, they’ve seen a 35% reduction in overdose deaths. These are places where people who are using can go to get clean needles and clean syringes. This is where people basically oversee the use of the drug and intervene if necessary.

It seems sort of antithetical. It seems like, “Boy, why would you fund a center for people to use drugs?” The data from Canada and outside Canada are such that it can be very helpful. That would be one of my messages to lawmakers as well.

Glatter: Do you think that the legislators could approach some of these factories as a way to crack down, and have law enforcement be more aggressive? Is that another possible solution?

Christo: It is. Law enforcement needs to be supported by the government, by the Biden administration, so that we can prevent the influx of fentanyl and other drugs into the United States, and also to crack down on those in the United States who are manufacturing these drugs — synthetic fentanyl, first and foremost — because we’re seeing a lot of deaths related to synthetic fentanyl.

Also, we’re seeing — and this is pretty intriguing and interesting — the use of vaccines to help prevent overdose. The first human trial is underway right now for a vaccine against oxycodone. Not only that, but there are other vaccines that are in animal trials now against heroin, cocaine, or fentanyl. There’s hope there that we can use vaccines to also help reduce deaths related to overdose from fentanyl and other opioids.

Glatter: Do you think this would be given widely to the population or only to those at higher risk?

Christo: It would probably be targeting those who are at higher risk and have a history of drug abuse. I don’t think it would be something that would be given to the entire population, but it certainly could be effective, and we’re seeing encouraging results from the human trial right now.

Glatter: That’s very intriguing. That’s something that certainly could be quite helpful in the future.

One thing I did want to address is law enforcement and first responders who have been exposed to dust, or inhaled dust possibly, or had fentanyl on their skin. There has been lots of controversy. The recent literature has dispelled the controversy that people who had supposedly passed out and required Narcan after exposure to intact skin, or even compromised skin, had an overdose of fentanyl. Maybe you could speak to that and dispel that myth.

Christo: Yes, I’ve been asked this question a couple of times in the past. It’s not sufficient just to have contact with fentanyl on the skin to lead to an overdose. You really need to ingest it. That is, take it by mouth in the form of a pill, inhale it, or inject it intravenously. Skin contact is very unlikely going to lead to an overdose and death.

Glatter: I want to thank you for a very informative interview. Do you have one or two pearls you’d like to give our audience as a takeaway?

Christo: I would say two things. One is, don’t give up if you have chronic pain because there is hope. We have nonopioid treatments that can be effective. Two, don’t give up if you have a substance use disorder. Talk to your primary care doctor or talk to emergency room physicians if you’re in the emergency room. The Substance Abuse and Mental Health Services Administration (SAMHSA) is a good resource, too. SAMHSA has an 800 number for support and a website. Take the opportunity to use the resources that are available.

Glatter: That’s very helpful. Thank you for joining us and for your wisdom regarding the opioid crisis.

Robert D. Glatter, MD, is assistant professor of emergency medicine at Lenox Hill Hospital in New York City and at Zucker School of Medicine at Hofstra/Northwell in Hempstead, New York. He is an editorial advisor and hosts the Hot Topics in EM series on Medscape. He is also a medical contributor for Forbes.

Paul J. Christo, MD, MBA, is an associate professor and a pain specialist in the Department of Anesthesiology and Critical Care Medicine at the Johns Hopkins University School of Medicine in Baltimore, Maryland. He also serves as director of the multidisciplinary pain fellowship program at Johns Hopkins Hospital. Christo is the author of Aches and Gains, A Comprehensive Guide to Overcoming Your Pain, and hosts an award-winning, nationally syndicated SiriusXM radio talk show on overcoming pain, called Aches and Gains.